The little things that are not so little... 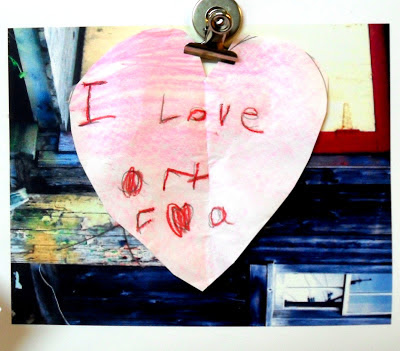 ﻿Froya and her huge heart (a gift)

Art teachers... In high school,  I had an instructor that actually took one of my works and ripped it up in front of the class because I slightly changed the still life that she set up for us to paint. I don't fault her, she must have had a bad day or was really frustrated at the time. I remember the feeling though and never wanted anyone to ever feel that. When I started to teach, it was a "given" that anything like that would NEVER happen to any of my students.. I think so far so good as the other day I was given the gift that you see above. It's funny, because  I was saying how little time I have had lately for painting and creating. I think the goddesses heard and decided to send me a reminder. The very next day I received this..... I promise to never forget that what I do matters. Thank you Froya....(one of our future artists)  I love the F "hearts" A...
Posted by Unknown at 6:29 PM 2 comments: 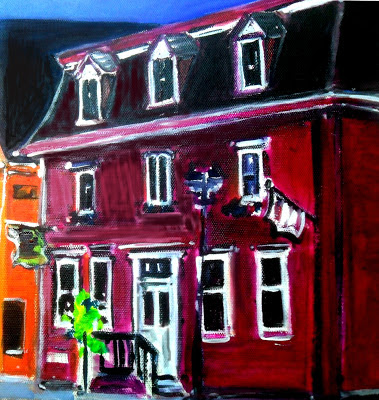 
Telemarketing... I finally have mastered the art of discombobulating those frequent callers. After putting myself on the "no call" list (to no avail) I decided it was time to try a different strategy. The phone rings yet again.
A voice on the other end asks "Is this Mrs. MaKee?" Not even my name but one of the numbers that is listed in the public phone book under my household.  I was thinking quickly "Oh my" I said "She just passed away last week". Without letting him get a word in edgewise and barely pausing to breathe, I proceeded to tell him the story of her demise.
" Poor Mrs. MaKee" I said.  " She loved her Scotch you know and every evening would sit down to watch her favourite cooking show, with tumbler filled to the brim. She loved her striped fuzzy socks and wearing her flannel nightie with her 95 year old mottled gams hoisted up on her footstool". (I could hear him breathing).. "you wouldn't believe how many times we told her not to wear those striped socks as the bottoms were just too damn slippery. Well wouldn't you know it sir, she wanted to get herself a little more Scotch, wouldn't let us get it for her so she jumped up to get more before the commercial ended, tripped on her footstool,  slid clear across the room and because of those socks ended up  with her legs in the air, those bright knee highs pointing up to the ceiling and sir, she still had a grip on her Scotch glass." I kept talking..."The funeral was quite an event and everyone was there who was anyone. The  flowers where lovely . So many spoke about her colourful life. I was wondering if your company would like to make a donation in her memory to the UAA? It would be wonderful..oh, I should tell you it stands for Underpaid Artists Association as Mrs. MaKee loved art.." I heard a click... wonder if he will call back..don't think so... Payback is awesome....
Posted by Unknown at 7:07 PM 6 comments: