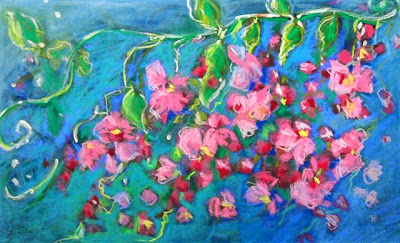 Wisteria  (Pastel on Canvas)  Sold
I was asked the other day what it was that frightened me the most. June bugs. Three of those little creatures became entangled in my hair as a three year old . I remember screaming down Elliot street in Windsor, trying to grab at them as their sticky feet clung to my head. Thank god for Grandmothers! While my Grampa tried desperately to keep me still, Gran pulled them out. After that, a hot toddy..Yes, no one who has an ounce of Scottish blood would deny  even a child a toddy. It is the cure for anything that ails "ye".  I am not damaged because of it. (Well, some may raise their eyes at that statement).
A toddy was the cure for just about anything. You needed emergency surgery, forget it, a toddy was the answer. A nervous condition, it was prescribed. A neighbour dissed you, again a toddy was quickly made to mend hurt feelings. Being allergic to feather pillows on the beds at my grandmothers would send me into coughing spells. Yes, in came that hot toddy. Now whether I was actually allergic to those feathers is a moot point as each night I stayed there, I would inevitably develop an allergic reaction to those damn pillows even when they changed them to the non feather type. Still,  just to calm me, a toddy was heated.
My other fear is being bored. Thankfully I have never been as yet. If I do , I know just what the cure is...
Grans Scottish Recipe for a Hot Toddy
Scotch (a true Scot doesn't presume to tell you how much)
Hot water to fill the rest of the space you have left after putting in the Scotch
Honey to taste
Stir and be calm and cured