The Subject of Dating.. 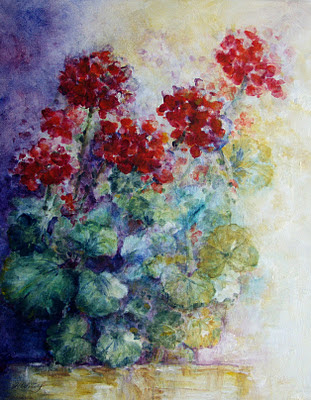 ﻿Geraniums (Sold)
I was out last night and we started discussing dates that we had been on in the past. This topic can either be a yawner, or put you into fits of laughter. I have done everything from tripping in my stiletto's and virtually flying from one room to another (honestly, airborne)  to leaving  my date  by himself and having a glass of wine with the wait staff as he was so nasty to her.  If  it can happen, it has happened to me on a date. One that I remember fondly was a first date with a pilot. I must admit he was hot. If you guys out there, want to impress a girl, taking her flying is a sure way to do it.  ****(Note to guys : Do not attempt this if you do not have a pilots license) "Would you like to go flyng?" I said yes. As we sat at the airport, waiting for the booked plane, I was so busy gazing at him, that when I went to take a sip through the straws that were in my drink, they both went up my nose. OK, so I thought that was it. No one wants to "second date" a chick who is that spacially challenged.  I felt much better though as I watched him move his hands along the top of the table only to see his palms were sweating. ( Although, it doesn’t instill confidence in you when the pilot appears to be slightly nervous). I know it’s a huge no no, but a little " fake dog fighting" took place in the skies. If you have ever tipped in a plane,  you know that your nose may possibly run. Like I said, if it can happen, it will happen to me and it did. I guess in the end he must have found something endearing in all that mess, as we stayed together for a few years. So I learned that there is hope for the klutzy and spacially challenged after all!